×
Skip to content
Buying for Christmas and not sure about size? Don’t worry: we have extended our free returns period to the end of January. 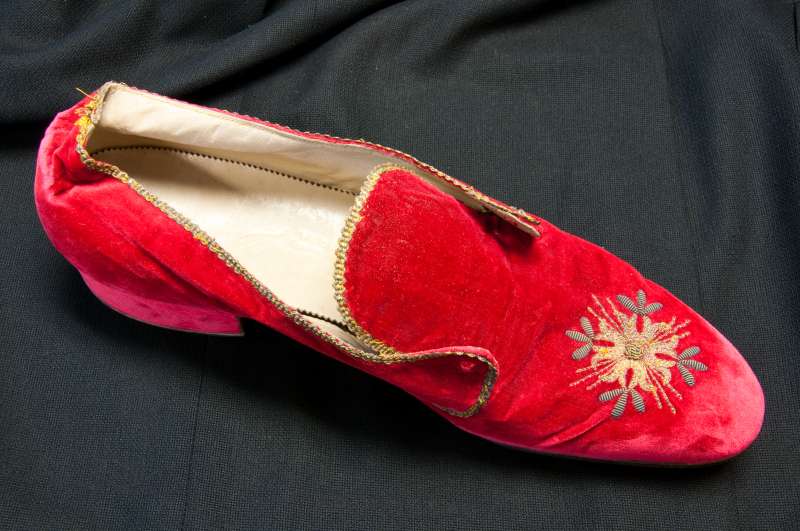 The History of Slippers

Today, slipping our feet into luxuriously super soft slippers is a wonderful sensation – akin to resting our heads on duck feather pillows, laying down on a thick lambskin wool blanket, or easing into a hot bath. Especially if you wear Shaffay luxury women’s slippers, of course!

Over the years, slippers have transformed into what we know and take for granted today from something very different. Slippers have developed for a number of purposes originating in different time periods. We have looked into the origins of slippers and their various uses over the course of history.

In the UK, when we talk about “slippers”, we generally mean soft, comfortable, indoor footwear. In American English, the word is often used to refer to slip-on outdoor shoes too – its original meaning, as we discuss below. In this article, we use the term in both senses.

Origins of the slipper

Slippers are a relatively new concept in the UK. In fact, the word “slippers” did not enter our vocabulary until the late 15th century. “Slippers” derived, unsurprisingly, from the word “slip”, for a shoe that one could easily slip on. In terms of common use, it was not until 1478 that the western world, particularly modern Europe, really adopted slippers.

In Asia however, slippers have existed for thousands of years. Whilst humans have been covering their feet with materials since prehistoric times, China is the earliest recorded modern nation to have not only employed slippers, but popularised slippers. Records of slippers being worn there date back to as early as 4700 BC, when the most populous cities worldwide housed no more than 10-50,000 people. During this time, while much of the rest of the world was still transitioning from bronze to stone age societies, the Chinese were already making slippers out of cotton or woven rush, complete with leather linings. These early Chinese slippers indicated status and were adorned with symbols of power, such as dragons, that formed a large part of the ancient mythology of that region.

In ancient North African and Middle Eastern cultures, slippers worn by wives of Sultans were status symbols too – more for the prestige of the Sultans than their wives, though: slippers were useless  for escaping across hot sands, but perfect for wandering around and looking beautiful in lavish palaces.

The Vietnamese were also early adopters of soft, comfortable slippers. Records show that slippers were worn in Vietnam as early as the 12th century.

The beginnings of slippers in England and elsewhere in Europe

The concept of changing outdoor shoes for indoor slippers in order to not bring dirt into the homes and courts of Eastern cultures greatly influenced Victorian society in England and consequently the wider British Empire. Designs such as the baboosh became popular.  As the textile industry of the British Empire boomed, decorating baboosh slippers became a popular pastime for Victorian ladies, allowing them to showcase their needlework and embroidery skills. A baboosh was originally a shoe that had no quarters or material at the back of the foot that was adopted as an indoor slipper.

The “Prince Albert’” slipper, rumoured to have been designed by Prince Albert himself, gained widespread popularity in the 1840s especially among men at gentlemen’s dinner parties. The Prince Albert slipper has a luxurious quality, with a leather sole, quilted lining and extended upper vamp, often topped off with a grosgrain bow or the wearer’s initials embroidered in gold. The Prince Albert slipper continues to inspire slipper makers and has been worn by a wide variety of people including the likes of Robert Kennedy and, even Kayne West.

Moccasins were introduced to Europe by early settlors in North America. The have influenced the design and creation of many contemporary shoes and slippers. While we perhaps most often associate them with North America, these soft shoes, made of leather or deerskin, have been worn by various peoples since very ancient times. The sides were often made of a single piece of leather that was stitched down at the top and the sole was made out of leather that was unworked, giving it a much softer texture than most shoes. This softness means that they could be embroidered relatively easily and so moccasins were often highly decorated with patterns and beads. The original moccasins were primarily intended for outside use as it  provided protection for the feet but was soft enough for the wearer to still be able to feel the ground. This was especially helpful for hunters and traders walking on forest floors and deserts but moccasins gradually became popular with the European settlers in North America who brought them to their home countries. In New Zealand and Australia, sheep shearers wear a type of outdoor moccasin made of synthetic cream coloured felt with a back seam along the top of the toe. These are designed to allow shearers to move smoothly along the wooden floors that they work on, and have a flap covering the laces to prevent them catching on the shearers’ handheld clippers.

It is likely the softness of traditional moccasins that inspired their reworking into soft indoor slippers by Europeans, but they have also been developed for modern outdoor purposes. Driving moccasins usually have soft rubber pads dotted along the soles to make the shoe longer lasting and more versatile while retaining the comfort and flexibility of traditional moccasins. Work boot moccasins tend to follow the design of traditional native American moccasins but have hard compound rubber soles.

In Europe, a rather different figure has influenced the wearing of slippers: the Pope. Popes have traditionally worn scarlet red slipper-style shoes since 1566. This papal tradition of wearing red slippers tradition was begun by Pope Pius V, who adopted red shoes and other red regalia to denote the blood spilt by Christ. Inside the Vatican, popes traditionally wear slippers, very ornate slippers, also in red to denote the blood of Christ. These are made from silk or satin and stitched with golden thread and completed with a gold cross garnished with rubies. Pilgrims who visit the Pope inside the Vatican or private residences are traditionally expected to kiss the red slippers. The tradition continued to modern times but the current pope decided to departed from it; Pope Francis prefers to wear more humble, plain, black shoes.

Slippers in the sense of slip-on outdoor shoes feature in famous stories. Perhaps this is because the word “slippers” is somehow more evocative and less prosaic than “shoes”? Cinderella’s glass slippers are perhaps the most famous fairy tale slippers. It was the 1697 version of the story, by Charles Perrault, that referred to Cinderella’s lost shoe as a slipper. This was retained when the story was incorporated into the Grimm Brothers’ tales in 1812 Theirs is a far cry from the much-loved movie version produced by Disney in 1950 but that still talks about slippers rather than shoes.

Perhaps the next most famous fictional slippers belonged to Dorothy in The Wizard of Oz. Remember those ruby red slippers worn with bright blue socks by Judy Garland in the 1939 movie? Those slippers were silver in the original 1900 novel by L. Frank Baum but red in the movie – apparently to take advantage of the newly available Technicolor film process. The original pair of ruby slippers that Garland wore has been sold twice since the film’s production, both times being recorded as the most expensive shoes from a film ever sold at auction. In terms of price, this was a whopping $165,000 (£130,754.69) when sold at Christie’s in June 1988, and $666,000 (£527,773.49) in May 2000. Perhaps that makes them the world’s most valuable slippers?! They are almost certainly the most iconic.

The classic pair of slippers in movies is, of course, fluffy and kitten-heeled. Think Frenchy’s pink slippers in that pyjama party scene in Grease. That said, most of the bedroom scenes in classic Hollywood movies tend to feature long, elegant dressing gowns and silky pyjamas with high-heeled shoes rather than slippers. Presumably, slippers were just not glamorous enough for that period.

These days, slippers have become almost unthought about indoor wear, but slipping into a really good pair of slippers is the perfect welcome home – so we think they deserve a more honoured place in our consciousness. We’re on a mission! The future of slippers is our luxuriously soft nappa leather luxury house shoes with their sleek lines, furry lining and soft, flexible soles. For that little bit of luxury in your everyday life, shop now at Shaffay.

This article has been brought to you by 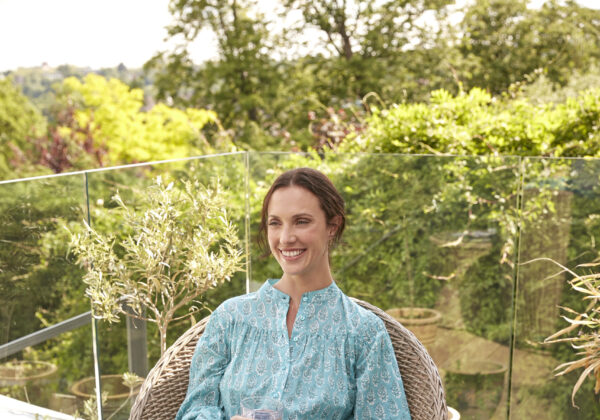 The joy of slippers 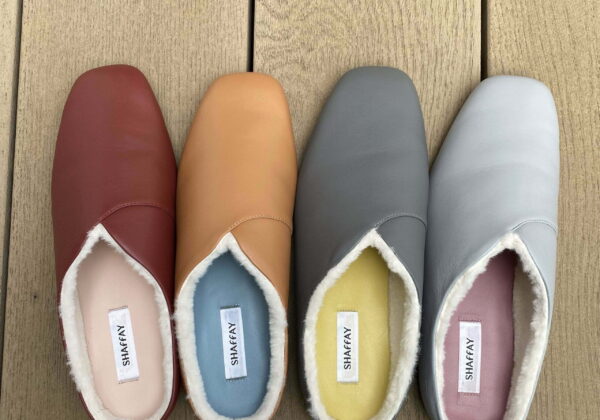 Read more Lifestyle Comment
Manage Cookie Consent
To provide the best experiences, we use technologies like cookies to store and/or access device information. Consenting to these technologies will allow us to process data such as browsing behaviour or unique IDs on this site. Not consenting or withdrawing consent, may adversely affect certain features and functions.
Manage options Manage services Manage vendors Read more about these purposes
View preferences
{title} {title} {title}